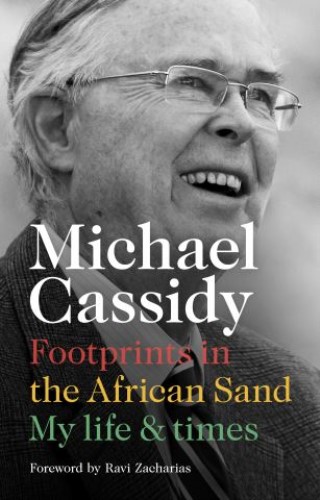 Footprints in the African Sand

My Life and Times

‘Michael Cassidy is one of Africa’s foremost evangelists and prophets. His story deserves a wide readership and will make a deep impact.’ - Moss Ntlha, General Secretary, Evangelical Alliance of South Africa

As Africa shook off colonialism in the 1960s, a young man was gripped by a singular purpose: to play his part in God’s plans for the fractured nations of Africa.

A son of apartheid South Africa, Michael Cassidy appeared an unlikely candidate to lead a team bringing a gospel message of salvation, reconciliation and hope to a continent overturning white rule. Over five decades, and with the support of his extraordinary wife Carol, Michael and his African Enterprise team courageously built up ten national teams and a network of relationships criss-crossing Africa.

Michael saw clearly the need for quality leadership. He fostered vital dialogue among top politicians in the tense run-up to South Africa’s 1994 elections. As the country hurtled towards civil war, he helped facilitate a last-minute settlement, paving the way for the peaceful inauguration of Nelson Mandela.

Told with inimitable charm and humour, this is a personal story of family, friendship and faith and beautifully demonstrates God’s love at work in the turbulence of Africa’s recent history.

‘A must read.’
Joni Eareckson Tada

‘African Enterprise has made, under God, a real contribution in South Africa. This is the founder’s inspiring story. I warmly commend it to you.’
Archbishop Desmond Tutu